Official first day covers are specially designed envelopes with attractive postage stamps which have been postmarked on the day the stamps were issued by the Post Office GPO or Royal Mail.

Originally first day covers were ordinary mail posted on the day the new stamp was officially issued.  The first official first day cover was for the 1924 Wemble.30
wembley Exhibition.  These are very rare and of great value.

Specially issued envelopes illustrated to accompany the commemorative or definitive newly issued stamp or stamps by the GPO Post Office or Royal Mail.  These are franked on the day issued and usually have a specially designed post mark.  First day of issue.  Originally these had a card insert as a stiffener, though later these were printed cards with information relating to the stamps issued.
There is a catalogue for with all the relevant details which gives the value and other information including the special handstamps of notable interest.   To obtain a copy click the link below.


FDC covers were at first issued by the GPO this was then taken over by the philatelic bureau in Edinburgh.  Others soon followed like...
Cotswold & Stuart Benham etc.

First day covers are a long term investment and not for quick profit.  A true example of this is Benham Silk Covers.  They are trading well below the original cost on ebay at present, but in years to come I think this will change.  They are far superior to any other fdc on the market.  They are very well illustrated have a stunning appearance, and a fine item to look at.  These covers will eventually buck the trend and return a profit on any investment long term.

Early covers are quite rare compared to modern covers.  Example is early QEII 1953 to about 1965 especially phosphor band covers.  These fetch premium prices in good condition.

Cover prices vary upon the address format.  Most desirable is unaddressed, followed by typed address, but least desirable is hand written covers which are worth very little.

There are some early covers that are forged and it is very difficult to tell
these from original ones.  Usually these are key covers like 1924 1925
Wembley exhibition and 1929 UPU as well as the KGVI high value stamps 1948 and
1951.  Arms set and festival of Britain.

I advise that a certificate is obtained or at least offered with these covers.

The first day of issue is the day on which a postage stamp, postal card or stamped envelope is put on sale, within the country or territory of the stamp-issuing authority. Sometimes the issue is made from a temporary or permanent foreign or overseas office. There will usually be a first day of issue postmark, frequently a pictorial cancellation, indicating the city and date where the item was first issued, and "first day of issue" is often used to refer to this postmark.

A first day cover (FDC) is an envelope whereupon postage stamps have been cancelled on their first day of issue. Depending on the policy of the nation issuing the stamp, official first day postmarks may sometimes be applied to covers weeks or months after the date indicated.

Plain non illustrated early covers do have some value, but not near as much.  Modern plain fdc covers are worthless other than a very fine used set of stamps.  The 1948 GB kgvi Silver Wedding is an example of n early DSC with some value as a plain cover.  See below.

​These covers are a very worth while investment.  I came across a collection of 5 albums full with many of them signed by the artist Steve Oliver.
​The bulk of the covers sold for £75 up to as much as £285 per cover.
​ Surprised by this I did some research and found that sadly he was no longer with us and that these covers are indeed very sought after.
​Keep an eye out for these as many were limited to 100 covers or less. 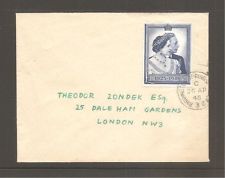 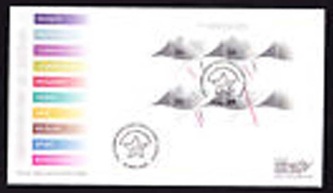